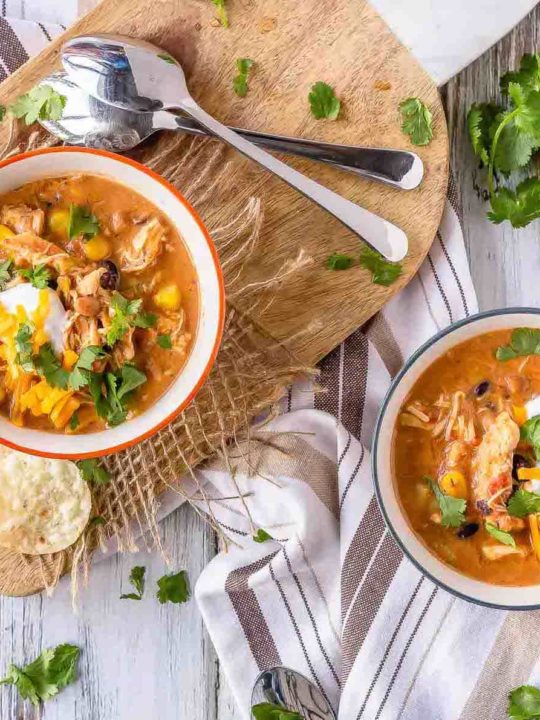 This Instant Pot chicken chili is one of the easiest meals to make and is the perfect warming meal for a cold night. You can also make it in the slow cooker! 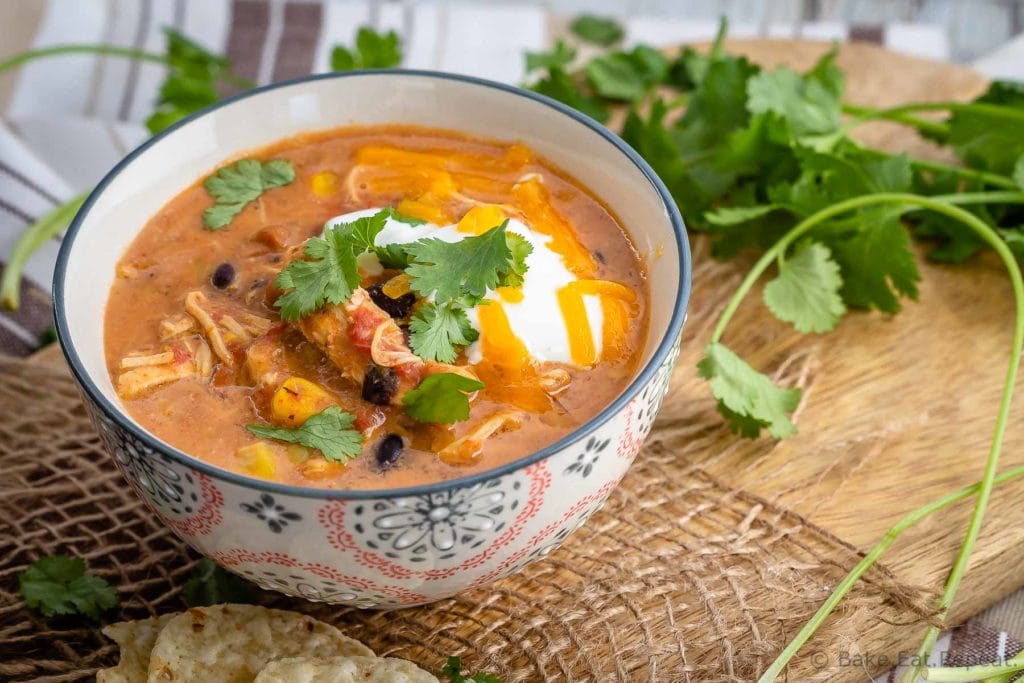 I have made this Instant Pot chicken chili so many times over the last 3 or 4 months. So many times.

It’s so tasty. And so easy.

And it freezes well if you need a meal to bring to someone. Or if you just like having meals in the freezer for later.

Or if the enormous batch that easily feeds six people is too large for your family and you want to freeze half.

My family eats a lot, so the leftovers really aren’t ridiculous around here when I make this Instant Pot chicken chili. 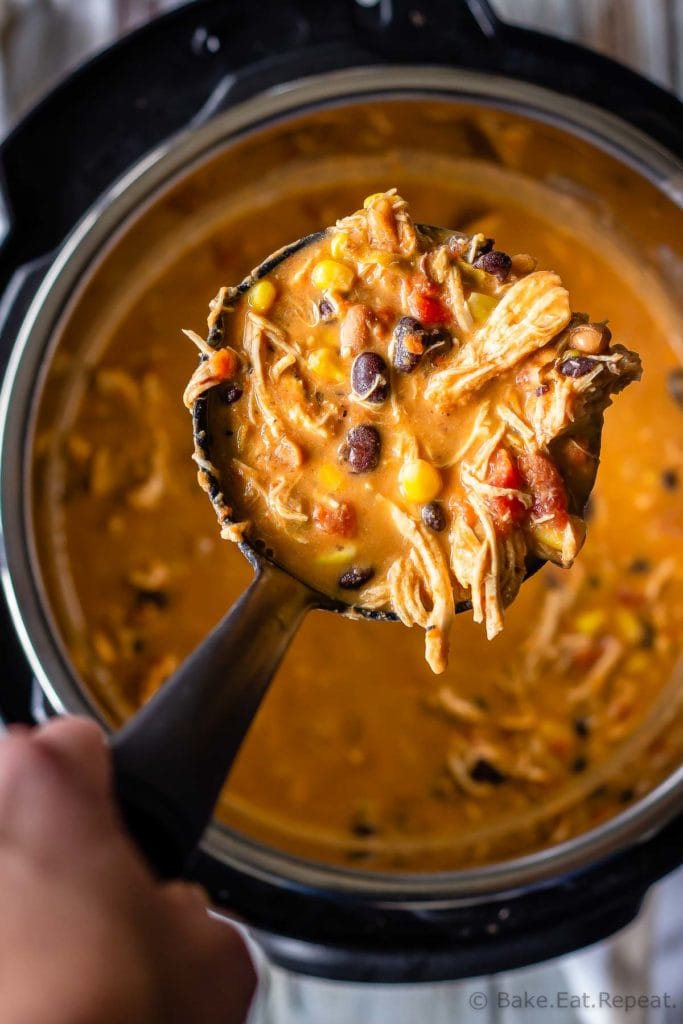 Although that does seem to depend on the day. I’ve made this recipe and it will be almost all gone. And I’ve made it and had half the chili left over.

My kids will sometimes eat as if they’ve never seen food before. And other days hardly touch it.

Must be something to do with how they’re growing that week I guess.

At any rate, this Instant Pot chicken chili makes enough for my family, even on the “everyone is starving” kind of days.

Which means it’s a winner in my books.

It also tastes amazing and is so incredibly easy to make. There’s a reason I’ve been making it incessantly! 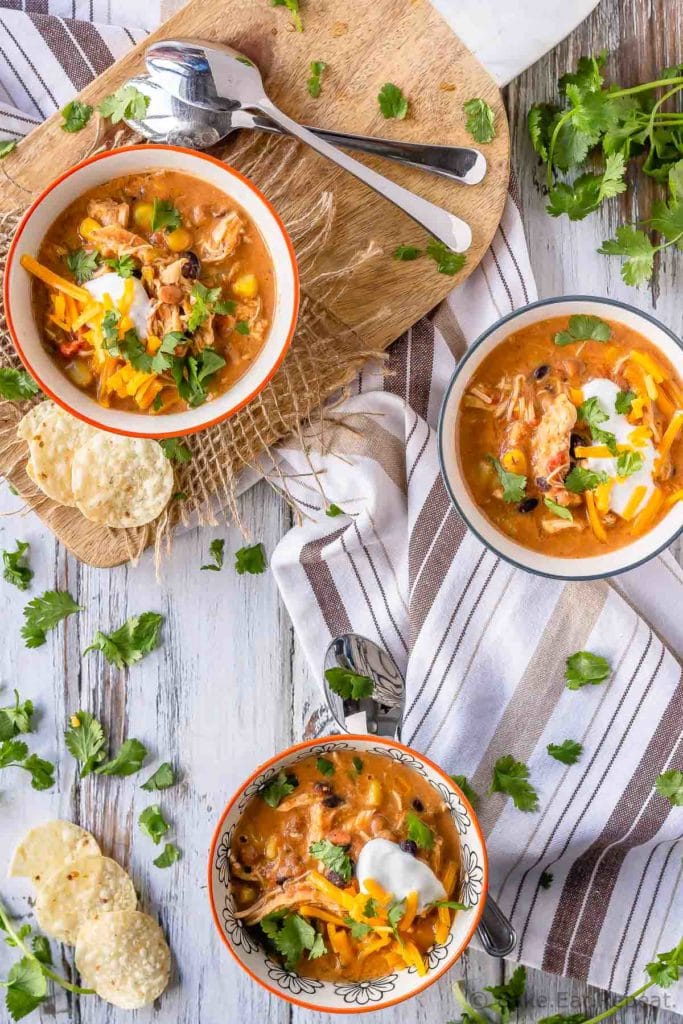 How do you make chicken chili in the Instant Pot?

Chicken chili is super easy to make in the Instant Pot.

You literally toss all the ingredients in, give it a quick stir, and push the chili button. Or manually set the pressure to high pressure for 18 minutes.

All you have to do once the cook cycle is complete is shred the chicken and stir in some cream cheese and milk.

Dinner really doesn’t get much easier then that.

Can you cook frozen meat in an Instant Pot?

I cook frozen meat in my Instant Pot all the time.

Since the chili takes 18 minutes, your chicken will be done at the end of the cook time, even if you put it in frozen.

I’ve made this chili both ways, with 18 minutes cook time, whether my chicken is fresh or frozen.

How do you make chicken chili in the slow cooker?

I’ve included directions for making this chicken chili in the slow cooker as well, if you want it to be ready for you when you get home.

It’s just as easy in the slow cooker. Again, throw everything in and turn it on. That’s really all you need to do for this chicken chili.

It needs to cook for 6-8 hours on low in the slow cooker.

You then need another 30 minutes on high after shredding the chicken and adding the milk and cream cheese, to thicken it a bit before serving. 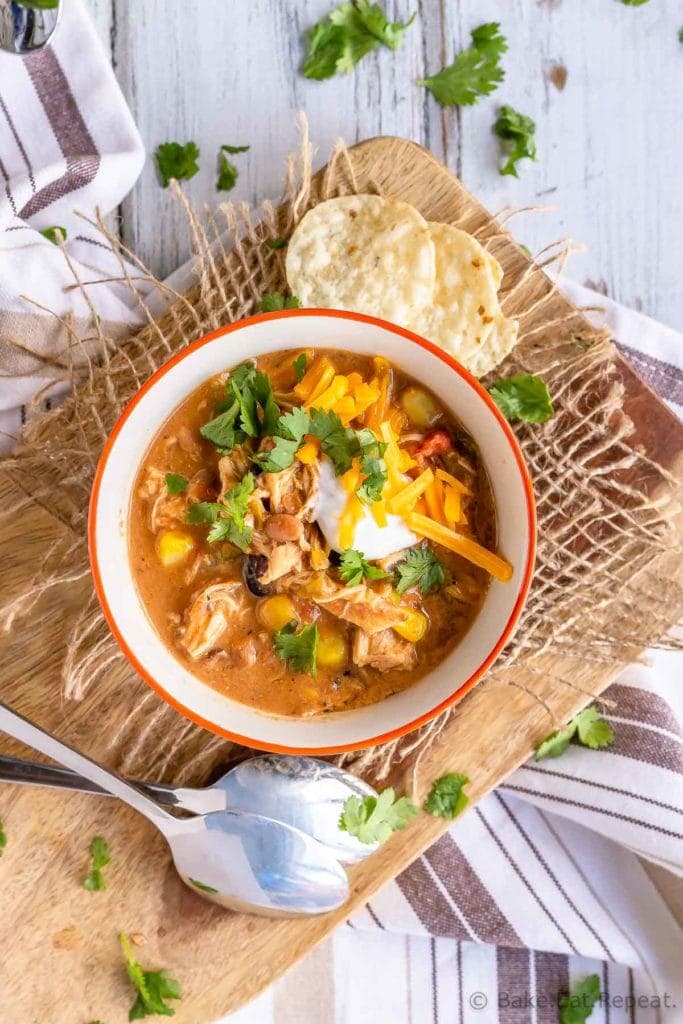 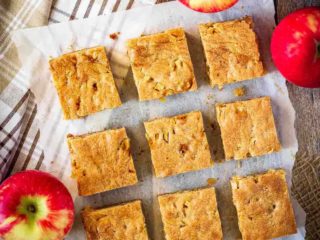 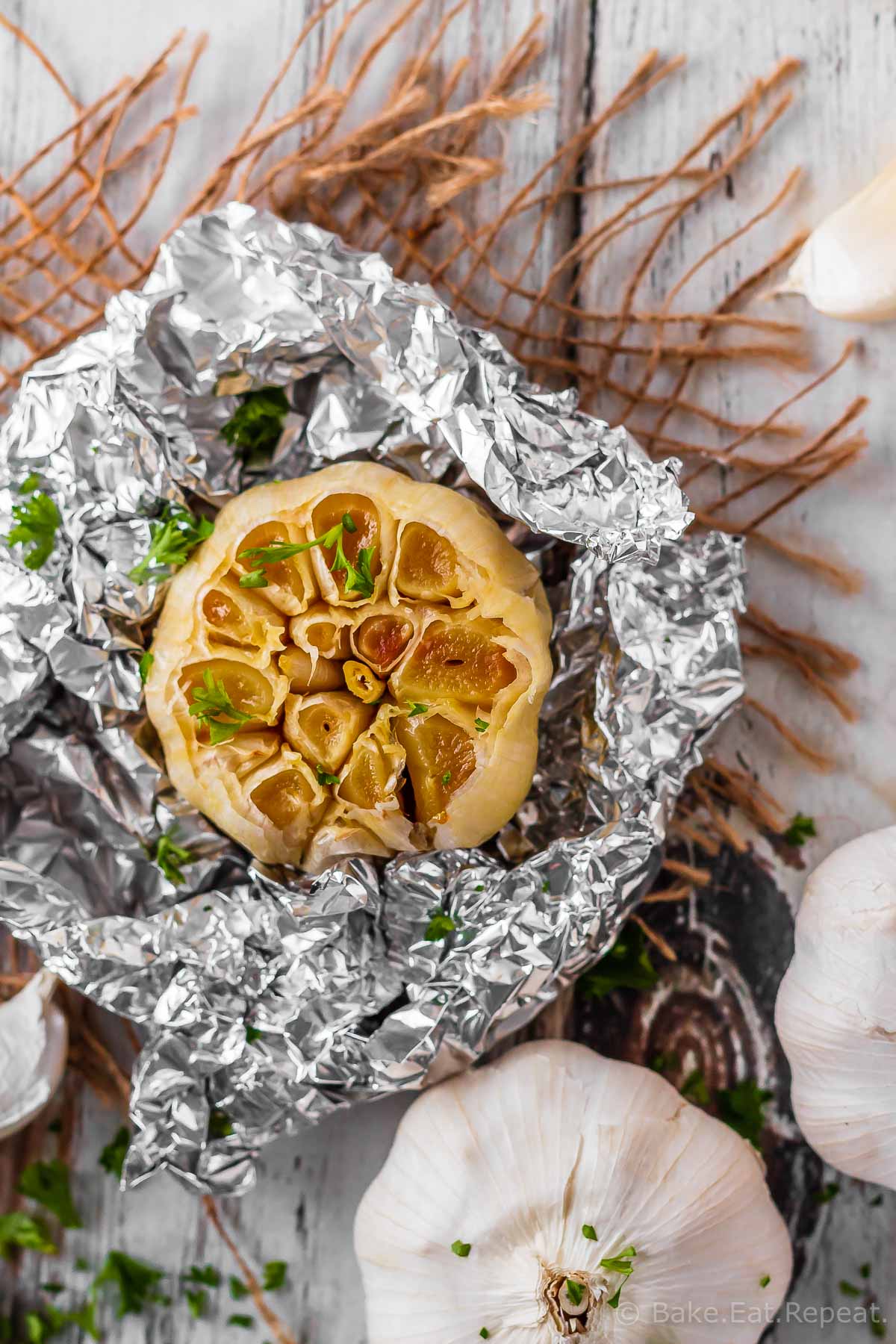 If you double the recipe do you need to make any changes to the cooking time? Thank you.

No the cook time will stay the same. Just make sure you’re not filling the instant pot past the 2/3 full line.

This was a great recipe! We also added diced up potatoes. I think next time I will add another small can of tomatoes :)

Just made this tonight, and can already tell this will become a standard part of my rotation. I LOVE anything that can come together so quickly and easily in my Instant Pot, and the flavors were outstanding! Like a previous commenter suggested, I used fire-roasted tomatoes and it added a ton of great flavor. Thanks for this perfect recipe!

Glad you liked it! It's one of my favourites for sure!

Delicious! I used frozen chicken thighs, 1 3/4 lbs. The chicken was perfect. I pretty much followed this recipe exactly except for a few spices. I also added an extra can of kidney beans to the saute cycle. This was my first time using an Instant pot and it turned out great! Thank you!

So glad you liked it Judy!

I used fire roasted tomatoes....game changer!! You didn’t even need the seasonings. Love it!!