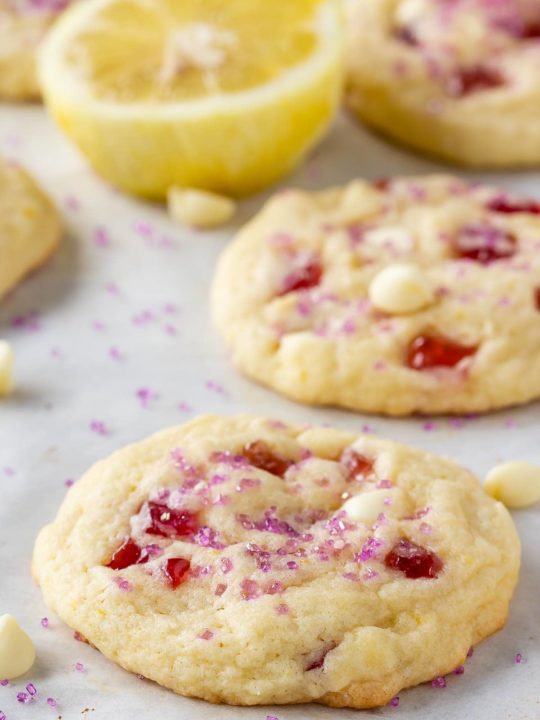 These raspberry lemonade cookies are just like the ones from Subway! Soft, chewy, and filled with raspberry and lemon flavours – everyone loves them!

I think raspberry and lemon together might just be one of my favourite flavours of all time. Besides chocolate of course.

It’s clear that I’m a fan though. Lots of raspberry lemon recipes happen around here.

These raspberry lemon blondies are definitely a favourite for my whole family. And these lemon raspberry sweet rolls are a little too good. Can’t let myself make those too often. They’re dangerous.

Today I’m sharing a copycat recipe for Subway’s raspberry lemonade cookies. I tried these cookies a few weeks ago, and loved them. So of course, I needed to recreate them.

It was a little tougher then I expected, to be honest.

I figured out the cookie part fairly quickly. I started from the recipe for these Raspberry Lemon Cookies, which have long been a popular recipe on my site. The Subway cookie is a bit softer though, and has white chocolate chips and raspberry jam bits in it.

Making the cookie a bit softer was easy, I just needed to add some cream cheese to the dough. Throw in some white chocolate chips and it’s all good.

But the raspberry part was tough. I tried quite a few different options – raspberries, raspberry jam, thickened raspberry jam, raspberry fruit leather – none of those was quite right. They were all tasty, but the flavour and the look were different then the Subway raspberry lemonade cookie.

I finally thought of trying raspberry flavoured candy in the cookies. That was the winner.

I only used the raspberry gummies, and cut them up really small. They melted a bit in the oven which replicated the flavour and texture of the Subway cookies quite well. They’re not identical, but pretty close.

I think that these raspberry jammy bits from King Arthur Flour would probably work really well, but they don’t ship to Canada, so I haven’t tried them.

So, one more tasty raspberry lemon treat to add to the list of favourites! If you love those flavours, you need to try these raspberry lemonade cookies. They’re so good!

Here are some more great lemon recipes for you:

I used Dare Raspberry Real Fruit Gummies for the raspberry bits in these cookies. If you can’t get those where you are, Swedish Berries worked quite well too, although they didn’t melt into the cookie and give as much raspberry flavour as the Real Fruit Gummies did. Welch’s fruit snacks are a similar texture to the Fruit Gummies and would probably work well too (although I haven’t tried this). 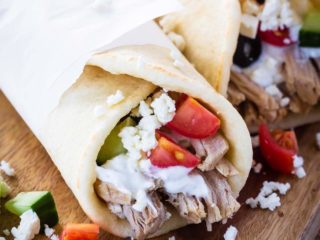 Nah you said "just like subway" in the description. Gummies!!!????

Well I made them with a subway cookie right next to them to taste test and they are pretty close. Like I mentioned in the post, I think the "jammy bits" that King Arthur flour sells would be good and are likely the type of thing that subway uses, but I can't get those in Canada. The type of candy used makes a difference too. Just any gummy candy may not end up being close to the subway cookies, but the ones I used are made with real raspberry juice and melt into a jam-like texture, making the cookies extremely close to the subway version. But you would know that if you bothered to read the post first.

Hi Stacey! I made these cookies today and they were awesome! The only thing I changed was that I didn't put the raspberry gummy candy in the dough. I put the pieces on top of each cookie then sprinkled it with the purple sugar.

One reason they do not taste like the subway version is because Subway uses a raspberry flavored sugar for the topping. They use frozen dough and sip then the cookie into the sugar before cooking so the sugar melts down a bit.

Yup, I know. But raspberry sugar is not something I had available. I mentioned that they're not identical, just close. :)