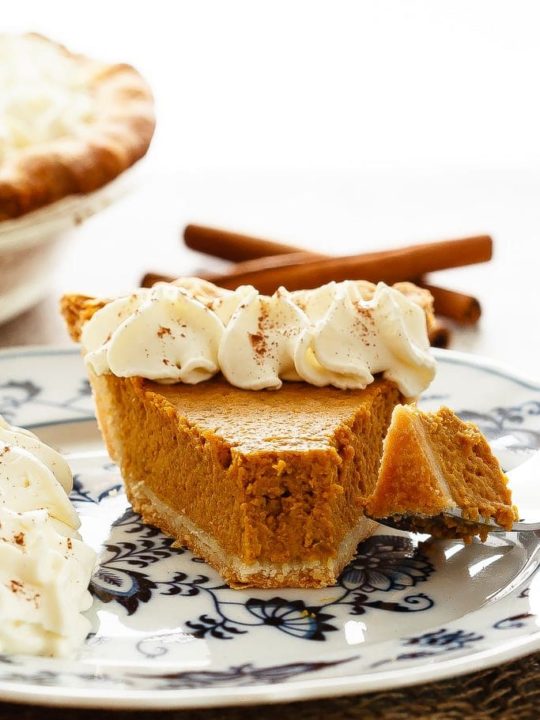 This is my Grandma’s recipe and it’s so much better then the store-bought version. If you’ve never made homemade pumpkin pie, you need to try this recipe!

I know there’s a million recipes out there (especially this time of year!) for pumpkin pie.  But this recipe is the best pumpkin pie.

This is my Grandma’s recipe, and I think we can all agree that grandmas make the best pie.  Mine probably isn’t even as good as hers (even though it’s her recipe) just because I’m not a grandma.  It’ll maybe measure up in another 20 years.

We have taste tested this pie against several different bakery pies, and it always wins.  Store-bought pumpkin pie just can’t compare.  It’ll do in a pinch, but if you have the time to make this homemade version, I would highly recommend it.

What is pumpkin pie filling made of?

The filling is made of eggs, cream, pumpkin puree, sugar, and some spices. It’s cooked on the stove and then poured into a pie shell and baked until it sets up.

What is the difference between pumpkin pie mix and canned pumpkin?

The canned pie filling is already ready to fill your pie shell with, so it will not work well for this recipe.

Should I use canned pumpkin or homemade pumpkin puree?

Either will work well here, but canned pumpkin is obviously easier.

If you’re using homemade pumpkin puree, make sure to strain it really well. It will have a lot more liquid in it than the canned pumpkin does, and if it isn’t strained well then the pie won’t set up very well. You will end up needing to bake the pie a lot longer to get it to set.

Make sure to strain out the liquid really well and then homemade pumpkin puree will work just fine in this recipe.

How to make Pumpkin Pie:

Here are some more great pie recipes for you:

I have made this pie with both canned pumpkin and homemade pumpkin puree. If you’re using homemade pumpkin puree, make sure that the pumpkin is very well strained or you will have some trouble getting the pie to set completely, and will likely have to increase the baking time. If your puree is very well strained it should bake the same as the canned pumpkin.

Also, pumpkin pie still looks a bit wobbly in the center when it is done - it is finished when the center of the pie is just set. If you over-bake it you will likely end up with some cracks in your pie (although it’ll still taste just fine!).

If you only want to bake one pie, freeze half of the filling in an airtight container. When you want the second pie you can defrost the filling overnight in the refrigerator and then proceed with the baking instructions. 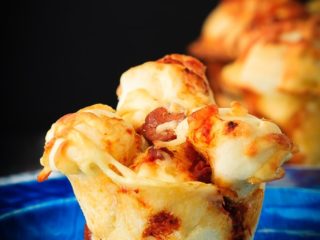 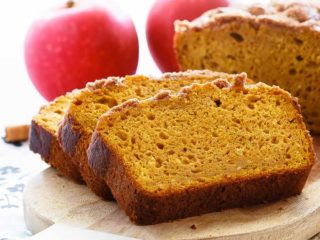 This looks amazing! I'm making this tomorrow for Thanksgiving! Hopefully it turns out as yummy as yours looks!

were is the pie crust recipe

Hi Barbara - there's a link to the pie crust I use in the recipe - here it is again for you: https://bake-eat-repeat.com/perfect-pastry-recipe/. Or you can use whatever pastry you like best and it will work just fine! Enjoy!

This pie looks gorgeous Grandma's recipes are the best!!! Pinning!

Grandma's recipe ARE the best, aren't they?! Thanks Mira!