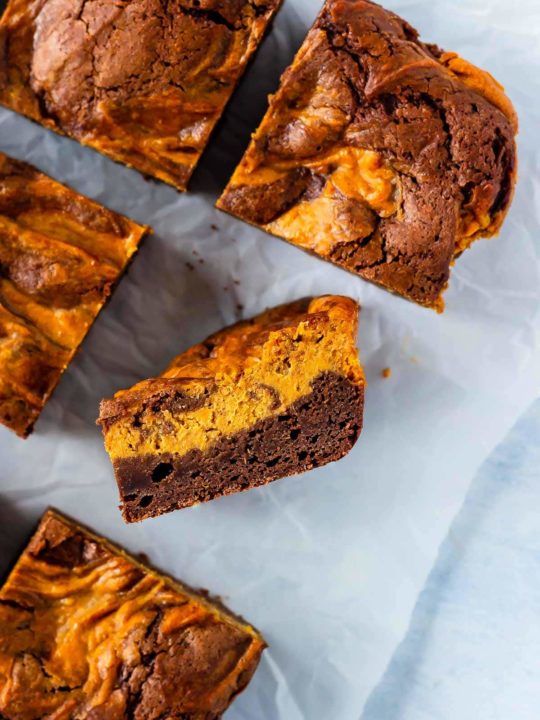 So the kids and I loved these fall flavoured, cream cheese brownies! Chewy chocolaty brownies with pumpkin spice cheesecake swirled into them?

What’s not to love? The four of us demolished them quite quickly.

Also, I made 3 batches before I was satisfied, and since no one needs that many cheesecake brownies, two of those batches got sent to my husband’s office, where I’m told they disappeared just as fast.

All that to say, that I think my husband is crazy for not even trying them. He has this thing with pumpkin spice and has stopped even trying anything I make that involves pumpkin.

I don’t really understand – pumpkin spice is amazing and I want to make all the pumpkin things every single fall.

Oh well, he doesn’t know what he’s missing, because these pumpkin cheesecake brownies were amazing. But they’re all gone now.

To make sure your brownies are fudgy and chewy, you basically want to undercook the brownies a little bit. They will continue to set up as they cool down, so if you bake them until they are completely done, they will end up being dry.

Bake them until the edges are puffed and the middle is just set.

A toothpick inserted into the centre of the brownies should come out with some moist crumbs on it, but not wet batter or completely clean.

I find for these pumpkin cheesecake brownies, I needed to bake them for 55 minutes, but ovens do vary a bit, so test at 50 minutes, but they may take up to 60 minutes.

Do I need to refrigerate cheesecake brownies?

I always refrigerate cheesecake brownies. With the cream cheese in them, it’s safer to store them in the refrigerator.

Once they have cooled completely, cover them tightly and store them in the refrigerator for up to five days.

How long should you wait before cutting brownies?

Wait until your brownies are completely cooled and chill them for an hour to make them easier to cut.

For these pumpkin cheesecake brownies, I let them cool in the pan on a wire rack for about 10 minutes. Then lift them out of the pan with the foil sling and place that on the wire rack for the brownies to cool completely.

How to make Pumpkin Cheesecake Brownies:

Here are some more great pumpkin recipes for you:

For the Pumpkin Cheesecake: 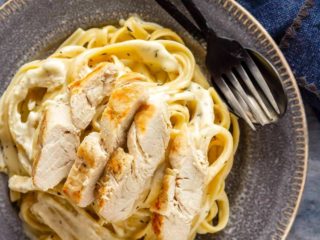 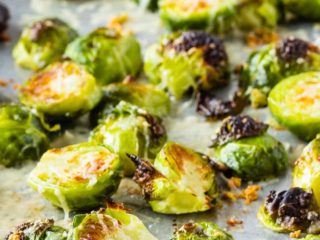 Oh wow, these really look fabulous! I don’t know if I’ve ever done a pumpkin and chocolate combo in anything, but wow!