Super soft banana bread bear paws that are made with whole grains and are much healthier than the store-bought ones. Plus, the kids love ’em! 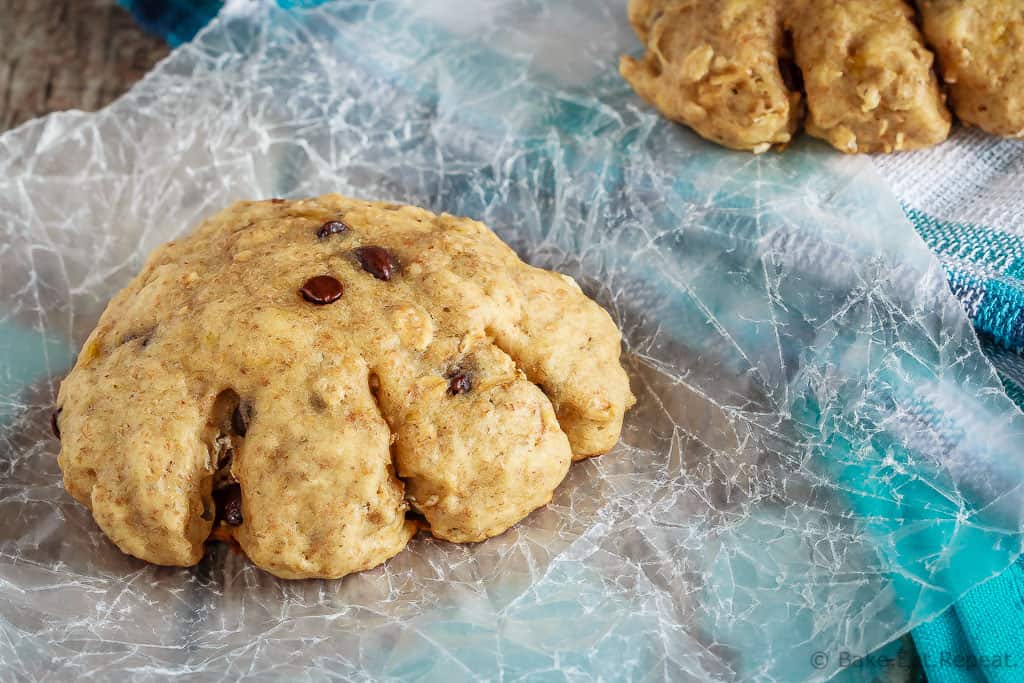 I have a healthy cookie for you today!  Basically, it’s banana bread in the form of a super soft, almost cake-like cookie.  And shaped like bear paws.

Because my kids incessantly ask for those bear paw cookies every. single. time. we see them at the store.  And I get sick of saying no.  So I made them some bear paws.

It’s not like I never buy snacks at the store.  Let’s be honest, it’s awfully convenient and easy, and some of that stuff is just plain tasty.  But cookies?  I hate to buy cookies.  I make so many of them anyways, and I like doing it, so why buy them?  They’re rarely better than homemade ones anyways.  Except oreos.  I will always make an exception for oreos.  Some things just can’t be duplicated exactly.  It’s true.  I’ve tried.  Homemade oreos are good, but they’re not the same. 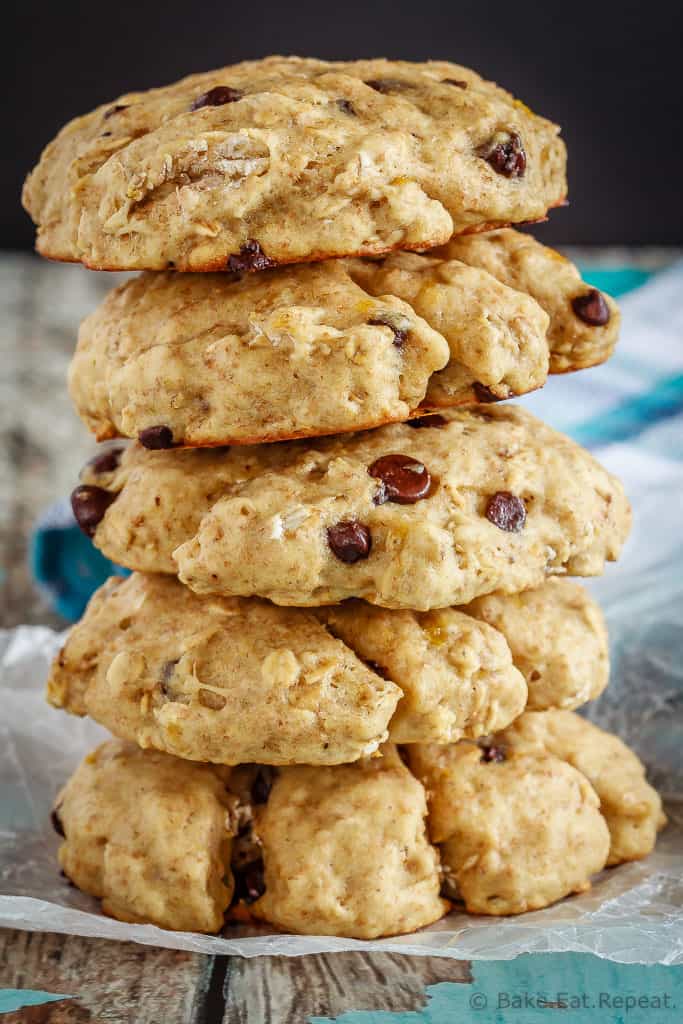 Anyways – bear paws.  Now I’ll be honest, I’ve never actually had a bear paw cookie.  Cake-like cookies just aren’t my thing.  But the kiddos like them, and have had them, and they told me these were pretty close.  In fact, when I made them a second time so I could get some pictures, my 7 year old ran over and hugged me he was so happy.  Either that means they’re amazing, or I don’t make things more than once often enough.  I’m going with the former!

At any rate, I think I can say that these are close to the banana bread bear paws you get at the store.  They’re soft, cakey, banana bread cookies that are definitely healthier than the store-bought ones.  They’re still cookies, so there is butter and sugar in them, but there’s a whole lot less than a regular cookie has, so that’s a win.  Plus these are made with whole wheat flour and oatmeal.

They are quite large, I used a 3 tablespoon cookie scoop to make giant bear paws, and then scooped about half a tablespoon of dough to make mini bear paws.  You could certainly play with the amounts of dough used to make them the size you would like, just watch the baking time then.  We added a few chocolate chips, cause everything is better with chocolate, but you could certainly leave them out if you want them to be healthier.

These were a great snack for the kids, and the perfect addition to their lunch boxes.  And, even though my “bear paw” shaping wasn’t amazing, they were just happy that they got the banana bread bear paws they’d been wanting for so long!  I’m going to have to work on the other flavours now! 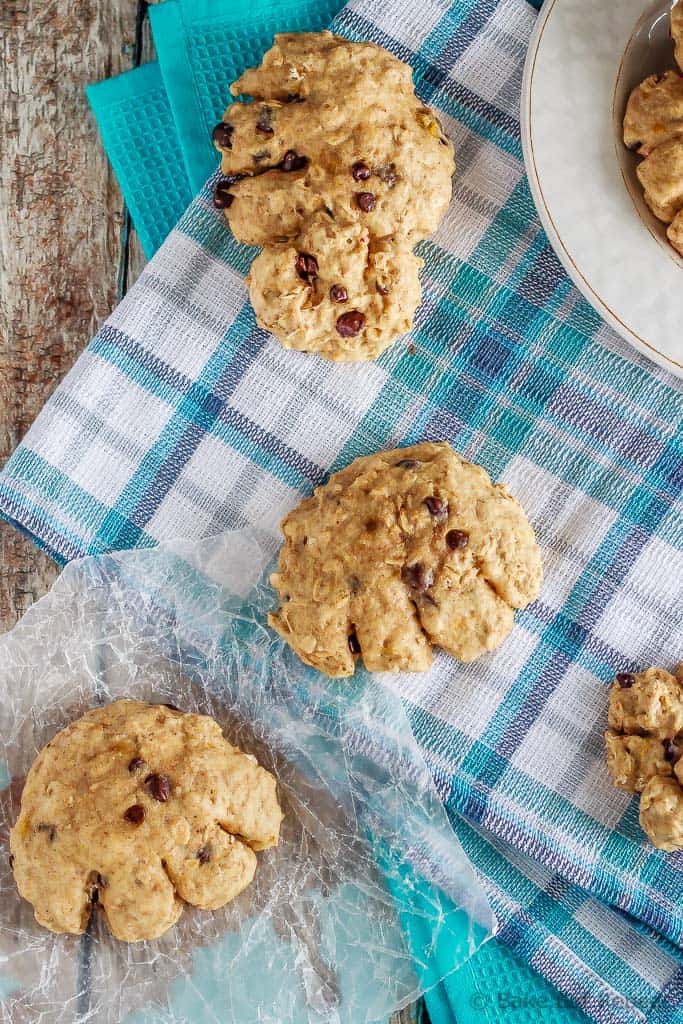 I also shared this banana bread bear paws recipe over on Food Fanatic.

Love these! The texture is spot on. I swapped the butter for applesauce and for some reason I added molasses (might have been looking at 2 different recipes at the same time?) But they're tasty!

Great recipe! My daughter adores bear paws and those are the best ones I've ever made. I think with recipes like this one you gonna ruin Dare Foods' business... LOL

My daughter, albeit 17 years old, loves store bought bear paws....I keep on buying them, though I hate the fact that they contain Palm oil. She just finished off another box, and I'm thinking....I need to find a healthier version...and voilà! I found your recipe...Haven't made it yet, but can't wait to try...stay tuned lol....

Thanks for the recipe it's a perfect pairing to the original melasses version I already make regularly. I took a picture for you but can't seem to post it.

Thanks for this recipe! I have made them several times now, individually wrap, and freeze them for school lunches. I have 2 helpful tips: I've found after freezing them they get really dry, so I add and extra 1/2-1 bananas. The kids didn't complain though. And I use kitchen shears to snip three cuts for the toes/claws and separate them a little before baking. They come out looking awesome. My kids, too, beg me for the store bought ones every. single. time. Frankly, they taste super gross so I'm super happy to have found this! Thanks again :)

Thanks so much Christine! So glad you love the recipe! Thanks for those tips - I've only given them to the kids after freezing and they never said they tasted different so good to know that an extra 1/2 banana keeps them from drying out in the freezer. And the kitchen shears idea is brilliant - totally doing that next time! :)