With bananas and oatmeal too.  But really, I just couldn’t put all of that in the title.  It would start getting out of control. And nobody wants that.

Besides, the chocolate and peanut butter are really the most important parts.  A healthy chocolate peanut butter smoothie is pretty awesome all on it’s own.  But adding bananas and oats to it really makes it a full meal, rather than just glorified chocolate milk.  I made this smoothie for lunch every single day last week, and only stopped because I had to get my leaky blender fixed.  Guess what I made the day I got it back.  I love this smoothie, as does my three year old – he stole most of mine the other day and I had to make another one. 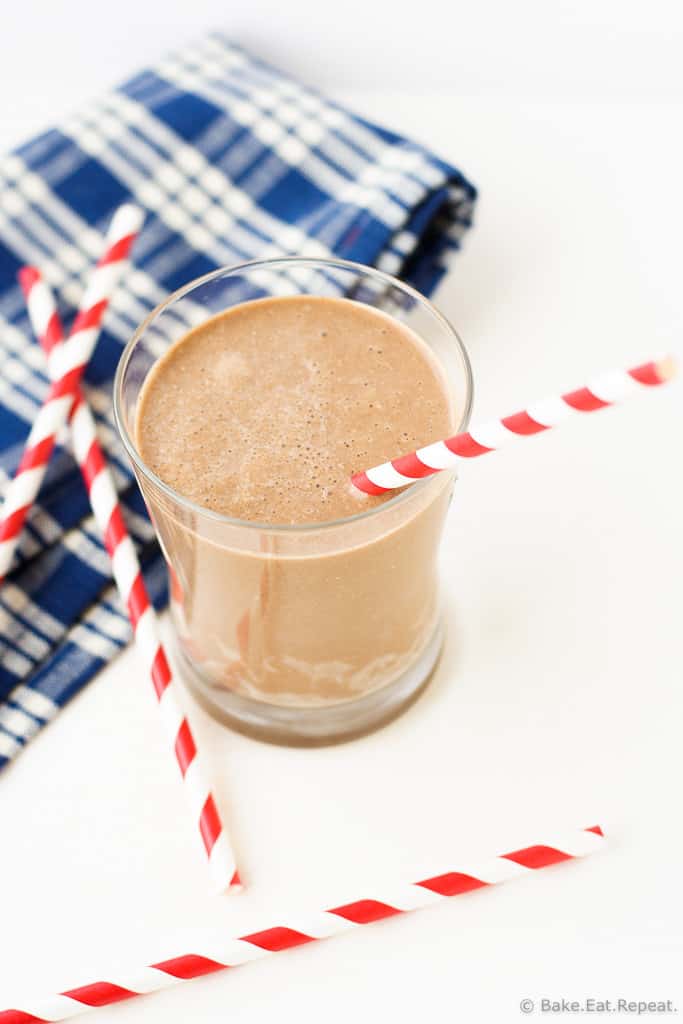 Just like with my oatmeal orange smoothie, you can’t taste the oats as long as you really blend it well.  The trick is to grind up the oats in the blender first until they’re powdery, and then add the rest of the ingredients and blend them together.  I also use frozen bananas in this smoothie to get that creamy milkshake consistency that makes a healthy meal feel like a treat.  All the chocolatey flavour is from unsweetened cocoa powder, and I add just a bit of honey to sweeten it up a little.

I should probably have some form or Mother’s Day recipe for you today I guess, not just a smoothie.  But this week kind of got away from me. It’s already Friday.  I don’t even know how that happened.  Everyone in the house was sick this week, which is always fun.  We had a huge blizzard on Wednesday, so that was kind of crazy, waking up to 6 inches of snow – and then it KEPT snowing all day long.  I did get a nice picture of my tulips covered in snow though, so there’s that.  At least it won’t last long, but still.  Plus, everything I tried to bake to post for Mother’s Day was a complete failure.  Fail after fail this week.  I don’t know what was going on.  Just one of those weeks I suppose.  Where life got in the way of my little hobby here – the nerve! 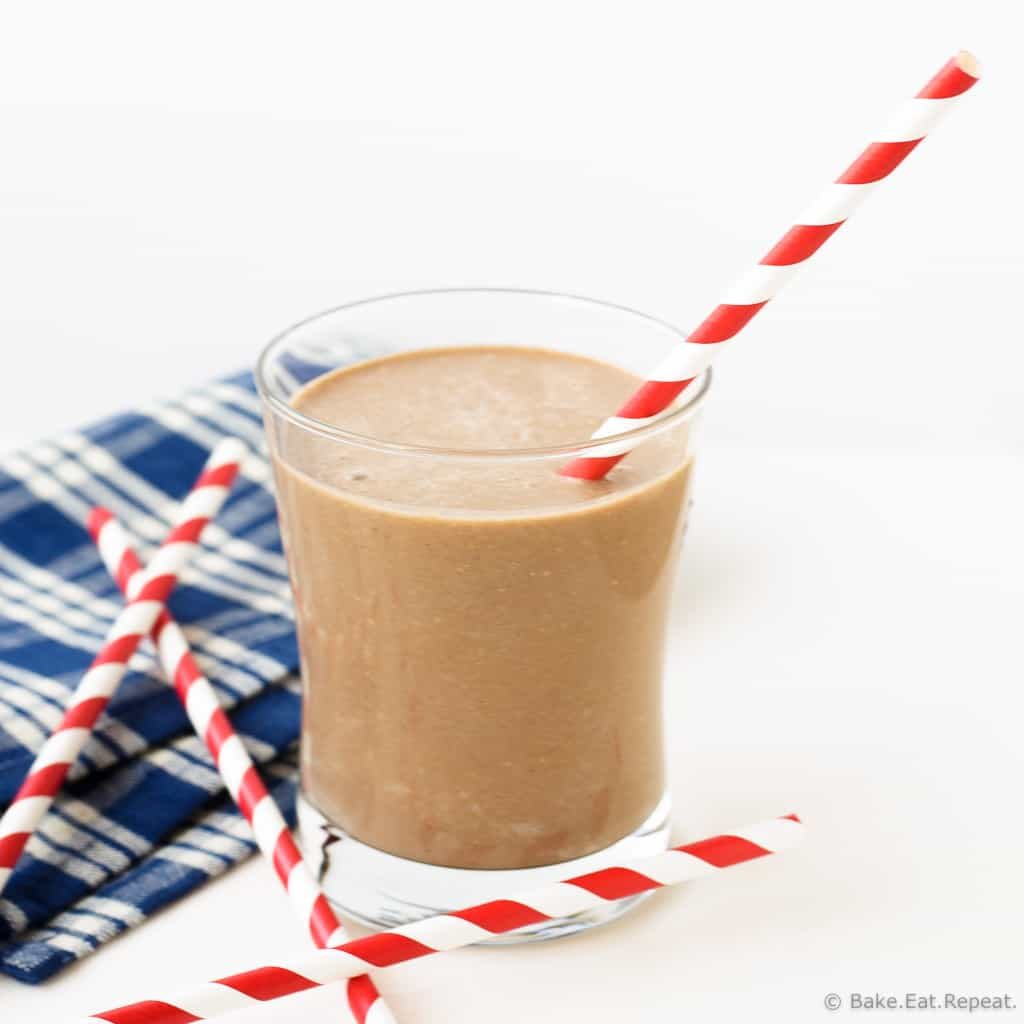 Oh well, if the dessert I made for Mother’s Day is actually good and not a big fat failure, I’ll share that with you next week!  If not, well, I can just chalk it up to a bad week and move on.  We all have those sometimes.

And in the meantime, there’s chocolate peanut butter smoothies.  That can’t fail.

Have a great weekend everybody – if you’re looking for a terrific brunch recipe for Sunday, here’s a couple of my favourites: 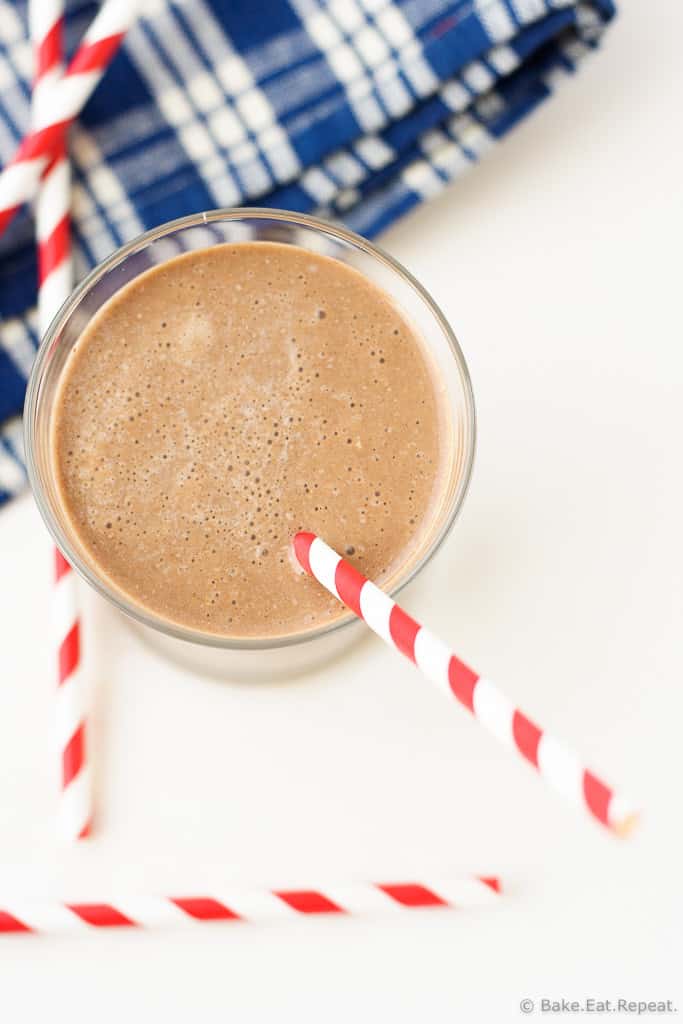 Ooh, this looks just like my favorite smoothie from Jamba Juice, but now I can make it myself! Thank you!!

No mo' snow!!! Good thing you have this chocolate-y peanut buttery goodness to keep you happy! I'm totally making this!

Agreed, more snow now would make me very sad indeed. Thanks Senika, hope you like it!

Boo to the snow and everyone getting sick. Hope you are all feeling better now. This smoothie looks amazing! Love the chocolate, peanut butter and banana combo!

Everyone else is on the mend now, I'm still fighting it - but a weekend with lots of sleep helped a lot! Thanks Kelly!

Where are you? I'm in Calgary and we had snowflakes last week-end, but not actual sticking-around snow...that just seems unfair in May! This smoothie looks delicious! Love that you added oats in there, they give smoothies so much more 'staying power' for me!

It's completely unfair right?! I'm near Edmonton, but evidently even Edmonton didn't get as much as we did, so just lucky I guess! It wasn't totally melted until Sat - so bizarre. And yes the oats definitely give smoothies more staying power - I find it's actually a meal for me then! Thanks Denise!

This smoothie is just calling my name, Stacey! Chocolate and peanut butter are pretty much the best combination ever! I love how rich and delicious this looks, while being healthy too!

Chocolate and peanut butter is definitely the best combination ever! Thanks Gayle!