I’ve been making this brown sugar baked ham for years now, and I still love it just as much as I did the first time I made it.

It really is amazing.

But….the cooking method is a little weird. I’ll admit it. I was skeptical the first time I tried it, but no longer. It really makes the best baked ham.

You need to pre-cook this ham before baking it. The first step is to boil the ham in a vinegar and water solution, or to pressure cook it in the vinegar/water solution if you have an Instant Pot. Then you shred the ham (it absolutely falls apart), layer it with brown sugar and dry mustard, and bake it.

And it doesn’t taste like vinegar, I promise. It tastes like the best brown sugar baked ham you’ve ever had.

Is bone in ham better than boneless?

Boneless hams are easier to slice, but I have found that they don’t have as much flavour as bone in hams, and the texture is sometimes a bit mushy.  So I nearly always buy a bone in ham.

And the slicing aspect doesn’t even matter for this recipe, because the ham gets so tender that slicing is almost impossible, and you need to shred it instead.

What’s the best cut of ham?

I like to get a half ham, or shank ham, with the bone in. They are usually quite large but do freeze very well. So if you only want to cook half of it and freeze the other half that’s an option. Or cook it and then freeze it for later.

How many people will my ham feed?

The ham I cooked this time was 8 pounds with the bone in,  and 6 pounds once I removed it. So theoretically that should serve about 12 adults. I think it actually would have served 16-20, but it obviously depends on how much everyone present eats!

For my family of five this ham was enough for two dinners. We also fried some up with eggs for breakfast a couple times. Plus sandwiches at lunch for a few days. So it lasted just over a week in my house. Ham lasts for quite a while, so it’s not a bad thing to have leftovers of!

Here are some great recipes for you that you can use the leftovers in:

Make sure to use a bone in cut of ham, and not a spiral cut ham.

If you’re making this ham in the Instant Pot instead of on the stove, you don’t need nearly as much water/vinegar to cover it as the ham is cut into chunks and the bone removed before cooking. I have an 8 quart Instant Pot so I could still make a large half ham (8 pounds before removing the bone) in it, but you will need to get a smaller ham if you only have a 6 quart Instant Pot. The 8 quart pot was almost at the 2/3 fill line with an 8 pound ham - so with a 6 quart pot you will likely need to get a ham that is about 6 pounds (before removing the bone/fat) to be able to cook it all at one time. 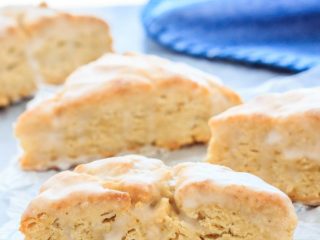 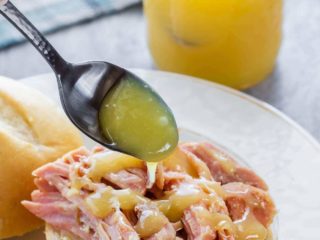 Thanks for introducing us to this absolutely delicious recipe, Stacey! It WAS easy to do, (Just like you said it would be)

We’ve added this recipe to our list of favourites!

I haven't tried that because I have an enormous stockpot so I don't need to, but I would imagine that would work. I think you probably wouldn't need to boil it for quite as long then....you might want to check if it's tender after an hour or so instead of waiting the full 2 1/2 hours. If it shreds easily then it's done. Not having done it that way I can't say for sure how long you would need to boil it if it's in chunks though - but I'm guessing it would be less!

What kind of vinegar do you use. I see the comment on apple cider vinegar but don't see what kind see the recipe call for.

I use white vinegar for this recipe.

Hi, can I use apple cider vinegar?

Hi Lora, I haven't tried it but I think it would work just fine, although it would change the flavour a bit. Let me know how it turns out if you try it!