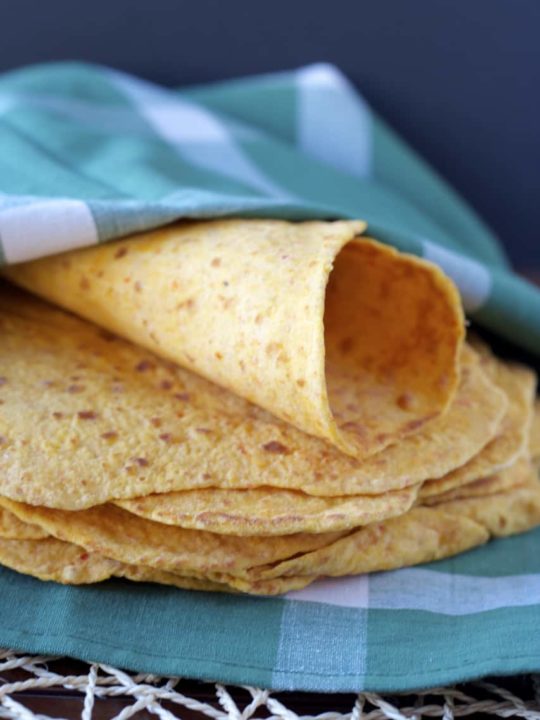 Easy homemade roasted red pepper tortillas – quick and easy to make and so much better than the store-bought ones!

I love homemade tortillas.  They are so much better than the ones you buy at the grocery store!  And so incredibly easy to make!  I will admit that the rolling and cooking process does take a few minutes, but it really doesn’t take all that long.

I made a double recipe of these, so 24 tortillas, and it still only took about a half hour to roll and cook them all.  I get two skillets going so I can toss them in as quick as I can roll them and the process isn’t too bad.  Longer than grabbing a package off the shelf when you’re shopping, it’s true, but oh so much better tasting!

And it’s just plain satisfying to churn out a batch of homemade tortillas!  Try it, you’ll feel like a pro-star.  (Did that term just conjure up memories of Pro-Star cereal for anyone else?  With Gretzky on the box?  No?  Just me?!)  And yes, I just totally dated myself, but that’s okay.

Anyhow, tortillas.  Homemade roasted red pepper tortillas!  With roasted garlic too – cause why not.  I was roasting red peppers anyways so I threw some garlic in the oven with it to add to the tortillas.  Adding garlic is never a bad idea in my opinion, especially roasted garlic.

These tortillas are super quick and easy to mix up, it’s all done in the food processor, which you really can’t beat for speed.  This recipe is very similar to my spinach tortilla recipe, except that you don’t need to add any water to the dough, as the red pepper puree adds enough moisture to the dough as is.  Other than that it’s pretty much the same.

So easy, just toss a couple red peppers and garlic cloves in the oven for 25 minutes, toss everything in the food processor to combine it, let the dough rest for 10 minutes, then roll and cook.  Easy.

And so incredibly tasty.

I bought a package of tortillas a couple of weeks ago.  What can I say – it was a busy week, I was tired, grabbing the package IS easier.  So disappointing.  Especially after making my own for the last year or so.

They stick together so much, it’s absolutely maddening trying to peel the things apart as they shred instead of coming apart.  Why do they do that?  Maybe it’s the brand I buy?  I’ve tried a few.  I don’t know.

These are just too good.  And too easy.  And I like feeling like a pro-star in the kitchen.

You could definitely make these fully whole wheat, or fully all-purpose flour, I did 1/3 whole wheat for the ones in the pictures. Also, you can use coconut oil, lard, shortening, or butter - I’ve been liking coconut oil lately, but I change it up depending on my mood. I think lard is the most traditional for tortillas, but I’ve used all of them and they all work well, so use whichever you prefer. 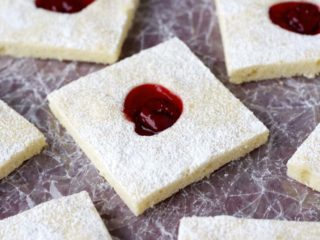 Hi Stacey, I have seen some of your comments on other food blogs, and decided to check out your blog today. Homemade tortillas are the best and I appreciate the fact that you used lard in your recipe. Lard is so under-appreciated and it's nice to see that more people are starting to use it again. I've started using lard in some of my dessert recipes and it's delicious. Anyway, great looking recipe.

Thanks so much Neeli! I think lard is the most traditional thing to use in tortillas, but I will admit I mix it up, and have used lard, butter or coconut oil depending on my mood. Thanks for stopping by!

Absolute YUMMY Roasted Red Pepper Tortillas! I so loved your addition of roasted garlic—that must be astoundingly flavorsome. Loved your recipe! :)

Thanks so much Anu!

Yum! I've only made homemade tortillas a few times and I can't wait to try these roasted red pepper and garlic ones! Love how flavorful they look!

Wow, great recipe! I love homemade tortillas, and the red pepper is even better!

Thanks Mir! I loved the red pepper in these, so good! :)

Yum! These look so flavorful :) We're having Mexican tonight and I wish I had some of these!

Thanks so much Medha!