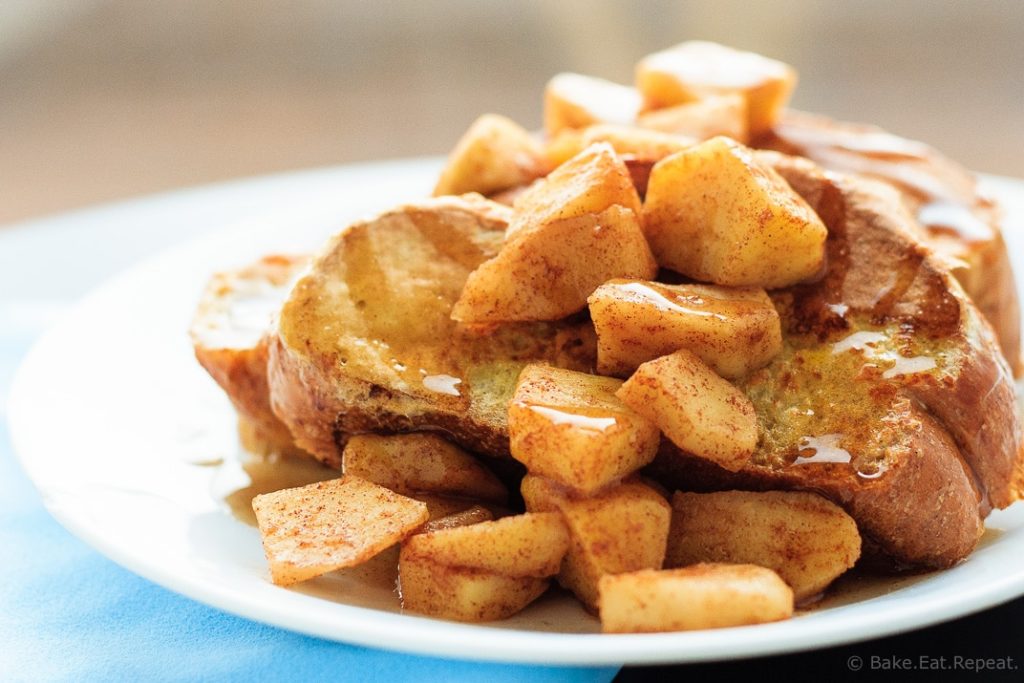 Have you made that cinnamon challah yet?  If not, get to it, because it’s super easy, and oh so amazing in this French toast recipe I have for you today!

Or, you know, go buy a loaf of French bread, because let’s be honest, French toast is always amazing no matter what bread you use.  It’s especially amazing with these cinnamon apples and cinnamon syrup, so if you’re looking for a perfect brunch recipe for the weekend, look no further.  This one is fantastic. 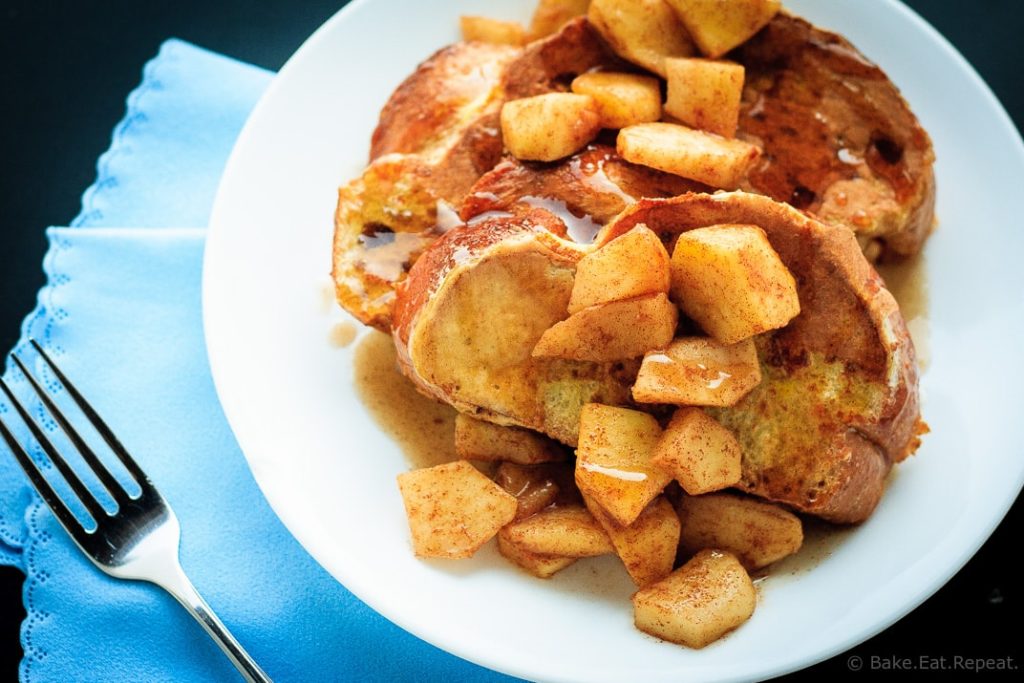 To make this French toast, I used my new Circulon non-stick electric griddle that Circulon Canada was kind enough to send me to try out.  I have been wanting a large electric griddle for a while now, so I was pretty excited when they asked if I would like to review it.

This griddle is by far the best non-stick pan I’ve ever used.  It’s a bit different than traditional non-stick surfaces, with a hard anodized coating in a circular ridge pattern.  It’s more resilient than other non-stick cookware, and you can even use metal utensils on it, without damaging the surface.  That excited me a lot, because I do tend to grab metal utensils rather than anything else.

The non-stick capabilities of this griddle are amazing.  I have used it for French toast, pancakes, sausage, and anything else I could possibly use it for in the last month, and nothing sticks.  You don’t have to use any kind of oil or butter or anything, and still, no sticking whatsoever.  I’ve always thought the best test for non-stick pans is eggs, as most pans are good for most things, but eggs always need a little butter or something to prevent them from sticking like crazy.  This griddle even works for eggs.  No sticking at all.  I was in awe. 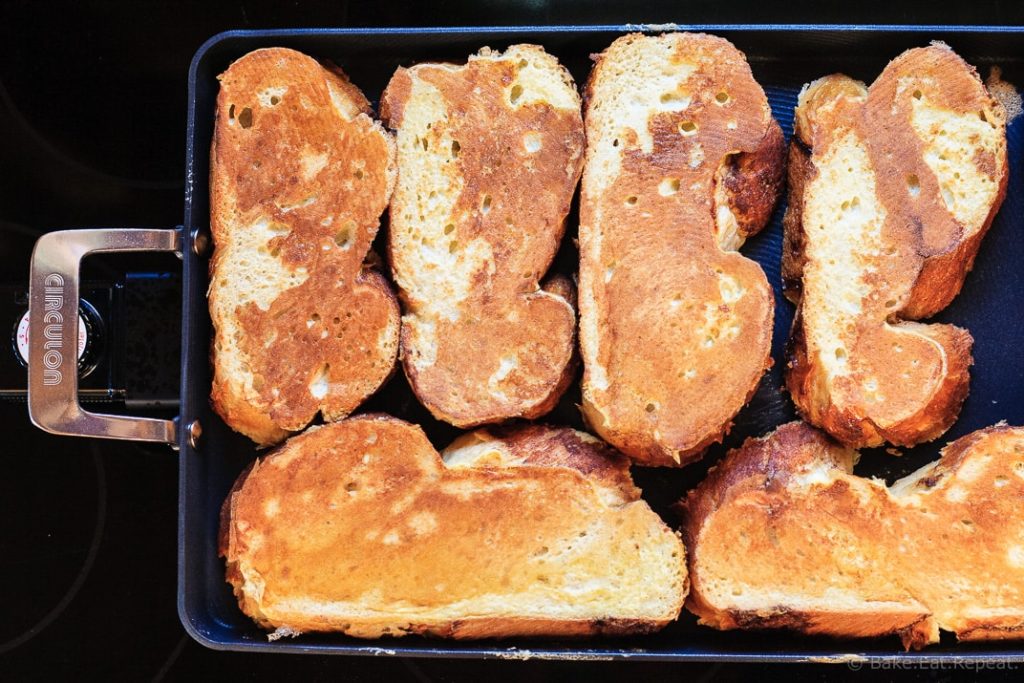 Plus, it’s huge!  Making French toast or pancakes or something for my family of five usually takes a while, making four small pancakes at a time on my biggest skillet.  I can easily make more than twice as much at once on this griddle.  So much faster.  I love it.

The only thing I don’t love about this griddle is that the handles get quite hot, and it can’t be moved when it’s turned on without using oven mitts.  This is a minor complaint though, and it certainly won’t stop me from using it whenever possible.  You generally don’t have to move an electric griddle anyways.  To be honest, the only reason I did is so that I could move the pan to a spot with better light for a photograph!  Since normal people aren’t taking pictures of their food while cooking, this likely won’t be an issue.

So if you’re looking for an electric griddle, I would definitely recommend this one.  Plus, Circulon Canada was nice enough to provide a non-stick 7.5″ frying pan for one of my readers, so if you would like to try out this non-stick cookware, just enter the giveaway below.  And then make some of this amazing French toast with cinnamon apples and cinnamon syrup.  You won’t be disappointed!

Disclaimer: Circulon Canada provided me with product for review.  As always, all opinions are my own. 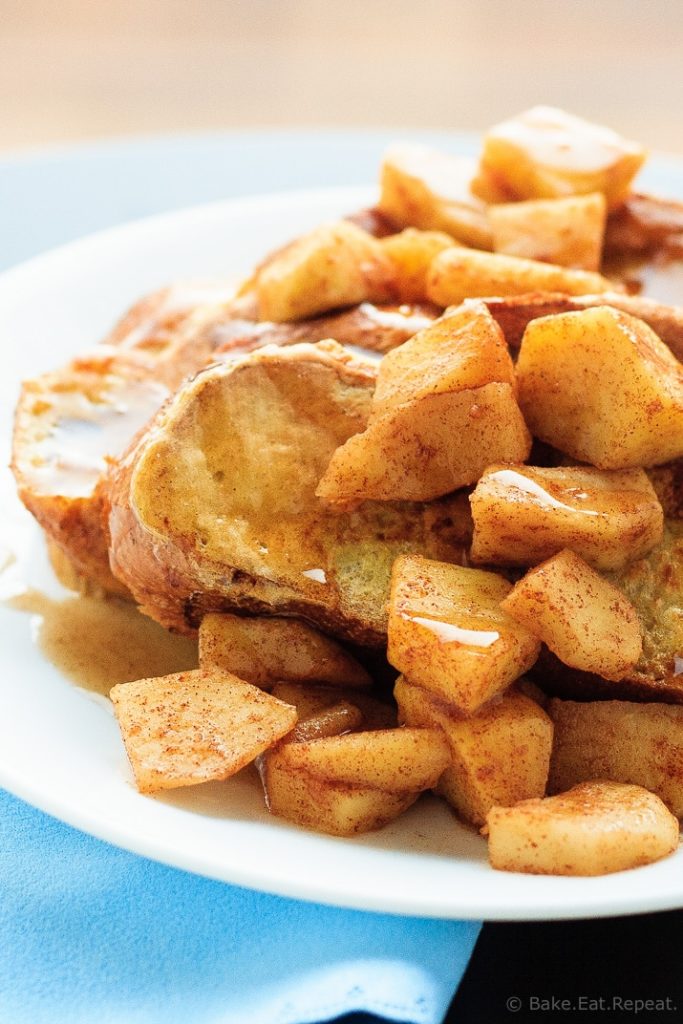 For the cinnamon syrup:

For the cinnamon apples:

For the French toast:

I used homemade cinnamon challah(highly recommend this!) for this recipe, but it works just as well with French bread. You could add 1/2 to 1 teaspoon of cinnamon to the egg mixture if you are using French bread and would like cinnamon French toast. The recipe is best if the bread is slightly stale, 2-3 days old, not fresh baked.

For the apples, I used gala apples which are quite sweet. If you are using a more tart apple, you might want to add 1-2 tablespoons of brown sugar to them, but I typically don’t add any sugar. The recipe makes quite a bit of cinnamon syrup, but it keeps in the fridge for several weeks.

*Giveaway is open to residents of Canada aged 18+. Giveaway is open now until Friday, Sept 25, 2015 at midnight (MST). Winner will be randomly selected and notified within 24 hours of the contest closing. Winner must respond with mailing address within 48 hours of email notification or a new winner will be selected and must answer a skill-testing question. Prize will be delivered to a street address by Circulon Canada.   {Giveaway Closed}

This recipe looks perfect for a fall, family Sunday brunch! Can't wait to try it out. Thanks for sharing it!

This looks really good, I even think I'll make the cinnamon bread first.

You definitely should - it's absolutely amazing. I don't know if I'm ever going to want to make French toast with regular French bread again - even though that's pretty awesome too! Thanks Andrea - hope you like it!

Sounds so yummy! I love all things breakfast...

I would make scrambled egg hash

Wow. I love that you made an alternative to maple syrup. Not that I don't love it, but like you say, its better if we can change it up. My hubby has been making Saturday morning pancakes religiously for a year now. Perhaps its time we give French toast a try! Thanks!

French toast is such a nice change from the usual pancakes! We love it. Plus, it seems a bit faster too, no batter to mix up I suppose! Hope you enjoy it, thanks!