I think candied nuts might possibly be the most addictive snack ever invented.

These cinnamon sugar almonds are incredible, and definitely addictive. 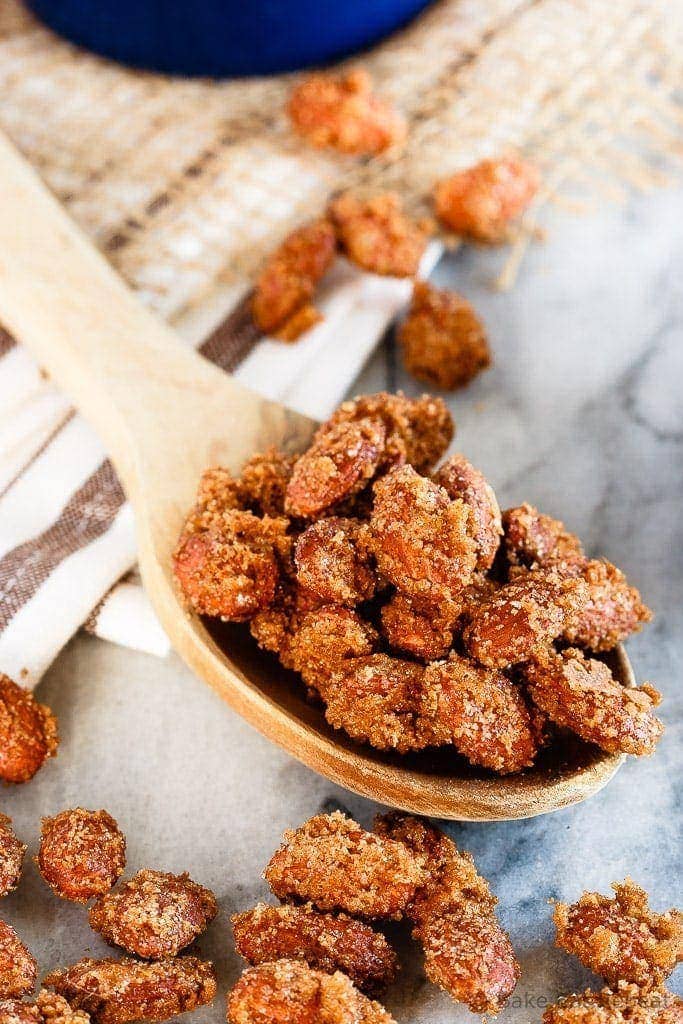 Whenever I make these, they are virtually impossible to stop eating.

We have to hide them from ourselves to ensure they aren’t all gone immediately, if not sooner.

Or give them away since we clearly can’t be trusted in the same house as these little treats. 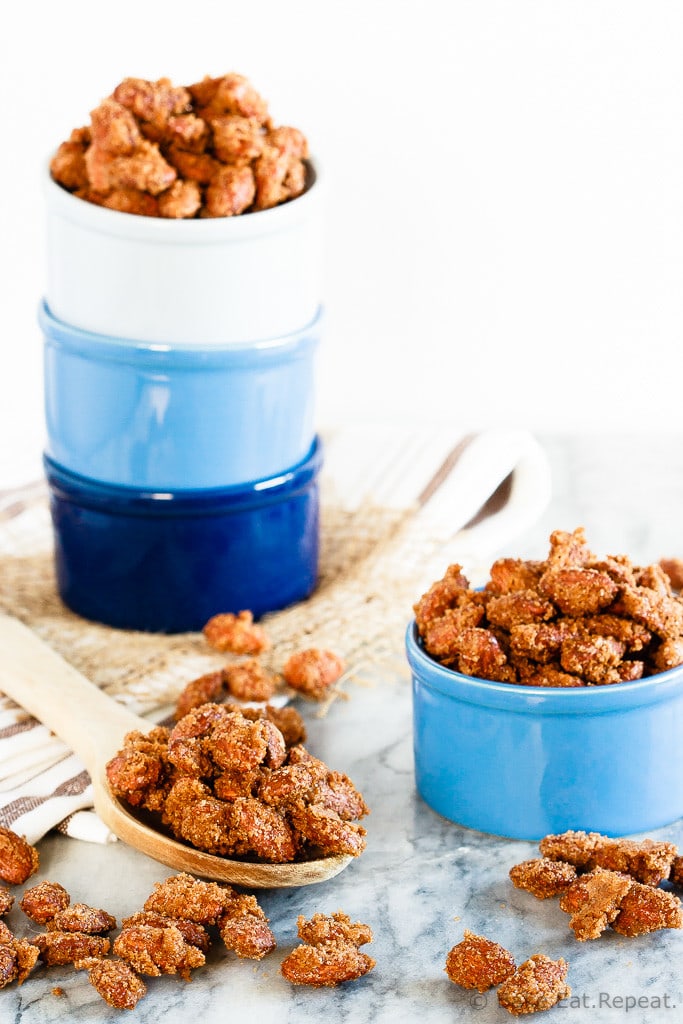 Candied nuts aren’t something that I remember having much growing up.

The first time I remember having them was when I spent 6 months in Germany at Bible College.  I was there over the Christmas season, and was wowed by the Christmas markets.

They were so neat, and if I’m ever in Germany again, I kind of hope it’s near Christmas just so I can go to those markets again!  We don’t have anything like that here. 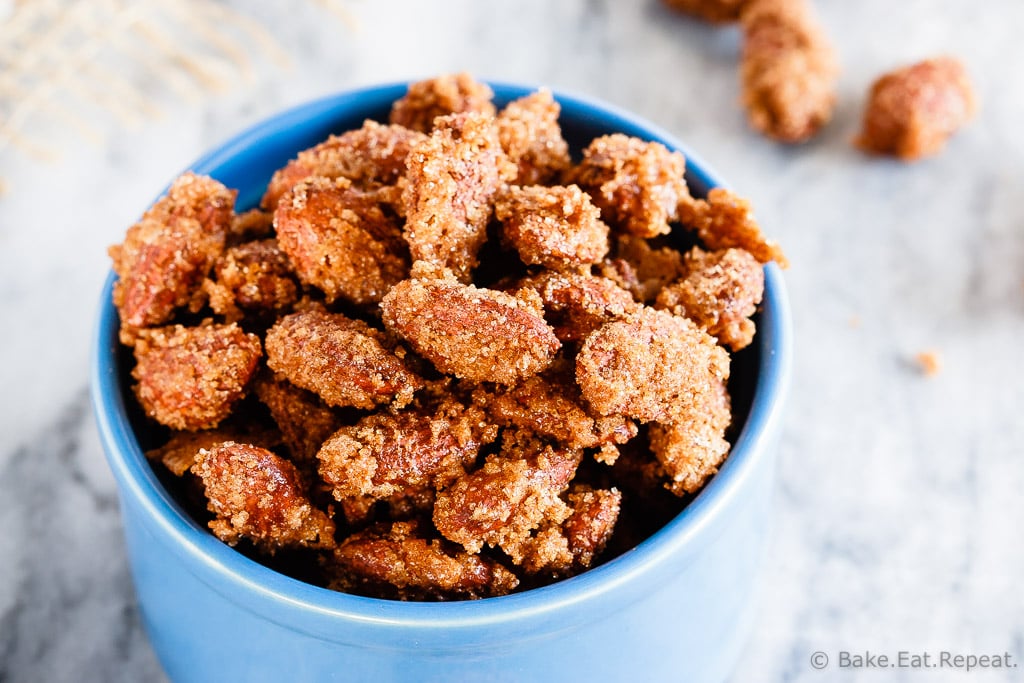 The one kiosk that we all spent far too much money at was the one making candied nuts.  They were completely amazing.

Warm, freshly made candied nuts served in a paper cone while walking around on cobblestone streets with Christmas music playing.

Amazing.  That paper cone was always empty far too quickly though! 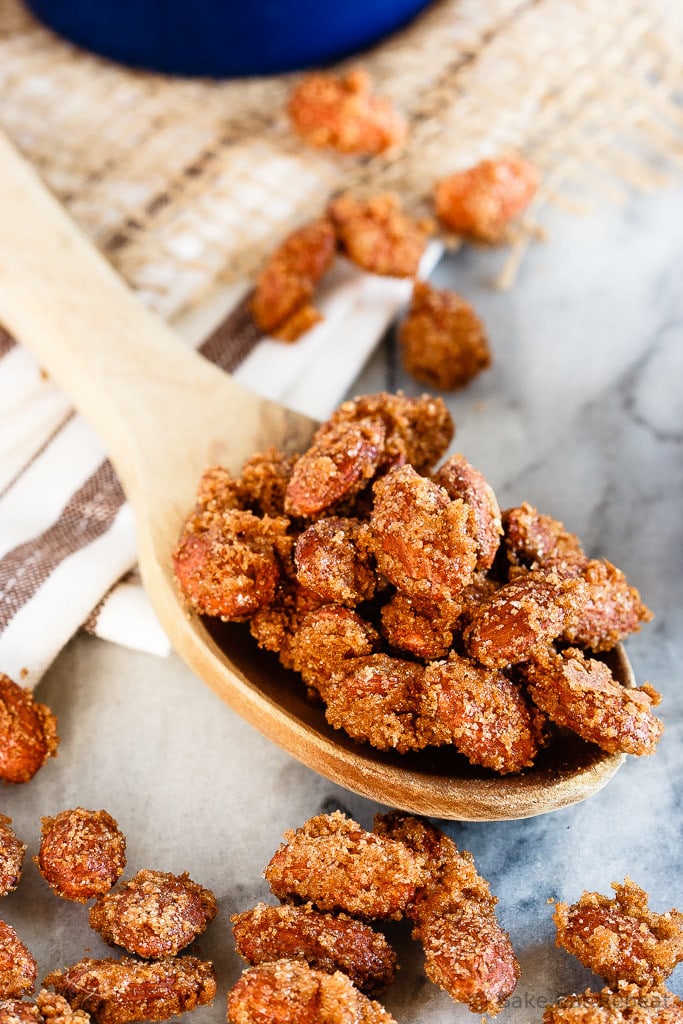 Now that I’ve discovered the complete simplicity and ease of making these cinnamon sugar almonds at home, that’s one memory I can easily relive.  These are pretty close.

We’re not eating them out of paper cones, hot from the pan, while walking through the crisp night air over cobblestone streets.

But you can’t have everything.

I could make some paper cones I suppose.  And it’s cold outside.

We could go for a walk.  It’d be exactly the same, right?

Well, at least the almonds will be just as amazing!

These turned out absolutely amazing. And, they were not difficult to make at all! I will definitely be saving this recipe, and I can’t wait to try it with pecans next!

I made these almonds as per the recipe but don’t feel they taste sweet or cinnamony enough. Can I bake again with added sugar

I don't think that would work well, as adding sugar and cinnamon after they've already been baked likely won't stick to the nuts. It sticks originally because of the egg white that the almonds are tossed in. And I'm not sure that adding egg white on top of the sugar coating would work well. I haven't tried that myself though.

Is it best to use raw or toasted almonds?

I always use raw almonds for this recipe.

Stirring them is taking the coating off! Is it really nessecary to stir every 15mins??

I've never found that it takes the coating off, but I do stir them really gently. I use a flipper and basically just lift them up and move them around a bit. The only reason for it is so that you end up with mostly individual candied nuts, instead of having them all stuck together. If you don't mind them being in clumps instead of individual nuts you could skip stirring them.

I tried this recipe the other day and put the nuts in a little cones I made with scrap of paper. Brought them to my family early Christmas and they were a huge hit! Just made a second batch to bring to some friends on Christmas Eve.

They’re so easy to make and only take a total of about an hour and a half between prep and cleanup. Definitely highly recommend!

So glad you liked these!