After 10 years of not being able to eat Chinese food, I suddenly can’t get enough!  I’ve actually had this recipe ready to go for a while now, ever since my whole week of Asian recipes.  There just wasn’t enough time to share this one as well!  Which is too bad since it might just be my favourite of all of them. 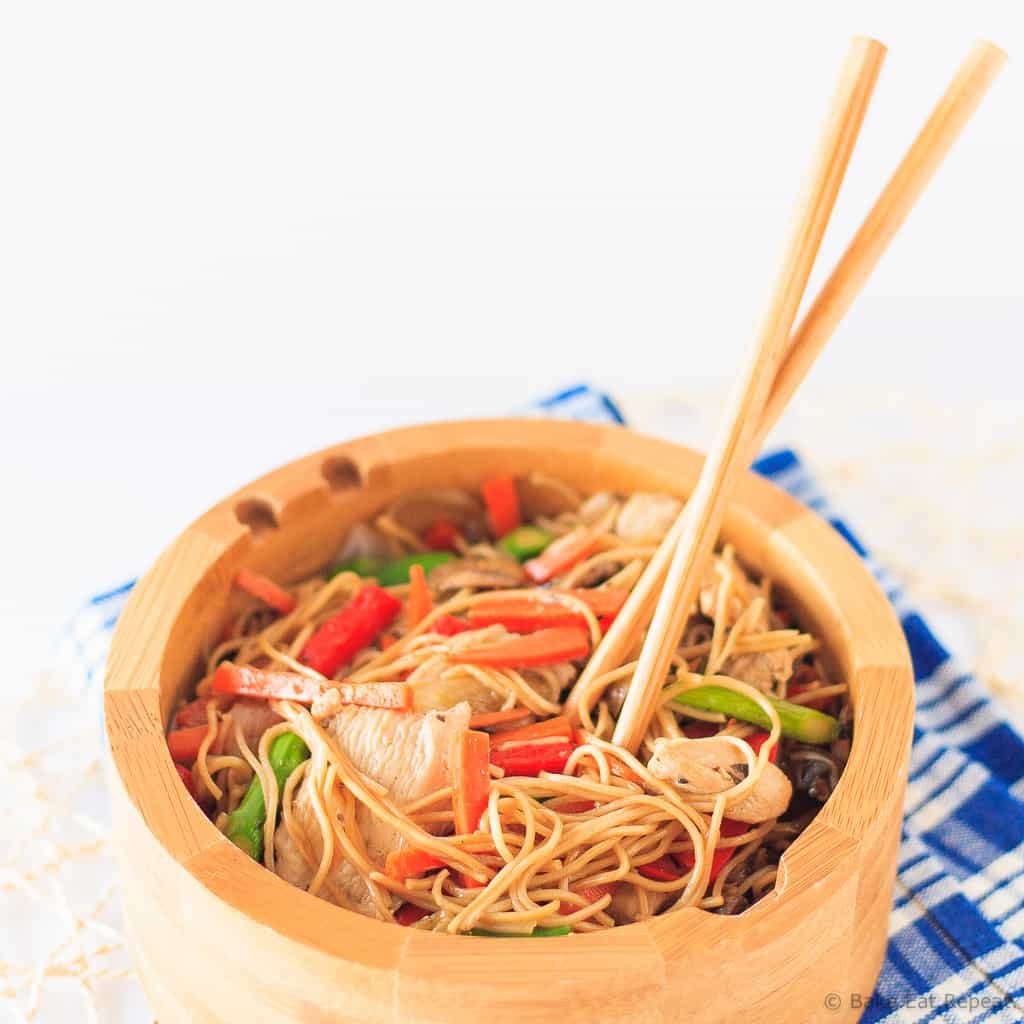 No – that lemon chicken is pretty much amazing.  But so is this chicken chow mein.  I can’t pick – I like food, and trying new recipes, and apparently making Chinese takeout!

The best part of this recipe though is that it is so incredibly easy!  Fast, easy and absolutely delicious.  You really don’t need much more from a recipe as far as I’m concerned.  I’ve made this recipe at least three times now, which is already saying something about it.  If a food blogger is making something three times in under a month you know it’s good.  Because I don’t make a lot of things over and over again – always gotta be trying something new!  Drives my family crazy.  But they were very happy that this one was so good that I made it over and over again.  And I will definitely continue to do so! 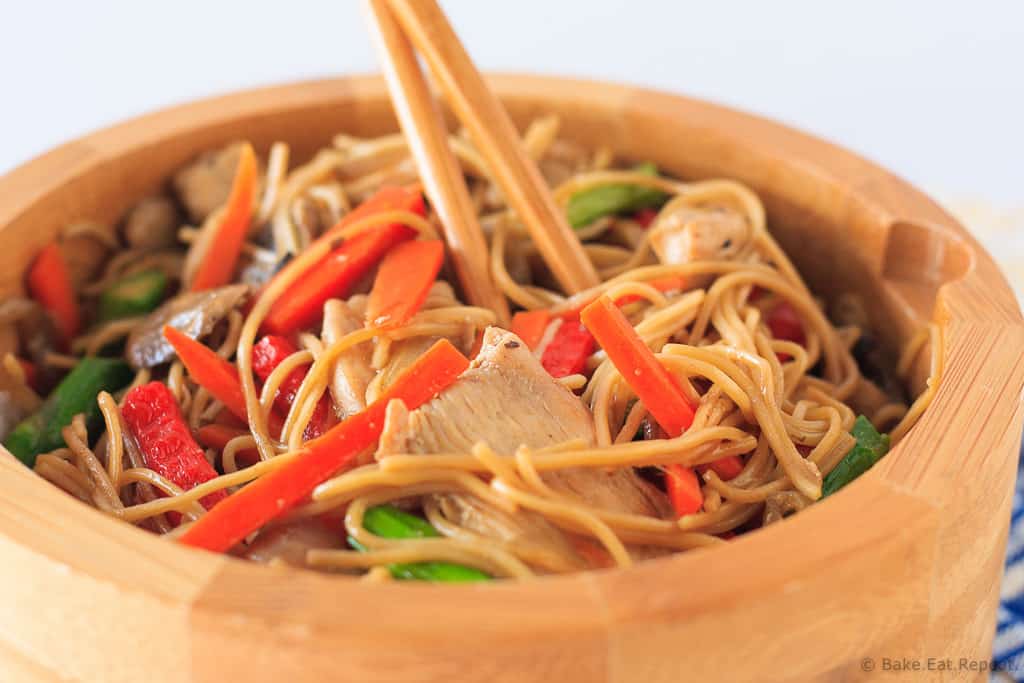 Plus, you can customize it to your liking.  Don’t like those veggies?  Use something else, or whatever you happen to have in the fridge.  Different protein?  Sure.  I’ve made it with chicken, shrimp and beef and all of them were great.  I think I’m partial to the chicken chow mein, but use whatever you prefer.

This chicken chow mein is so tasty.  And so fast.  And so easy.  You definitely need to try it.  So much better than takeout, I promise.  I didn’t even think I liked chow mein – that’s how much better it is! 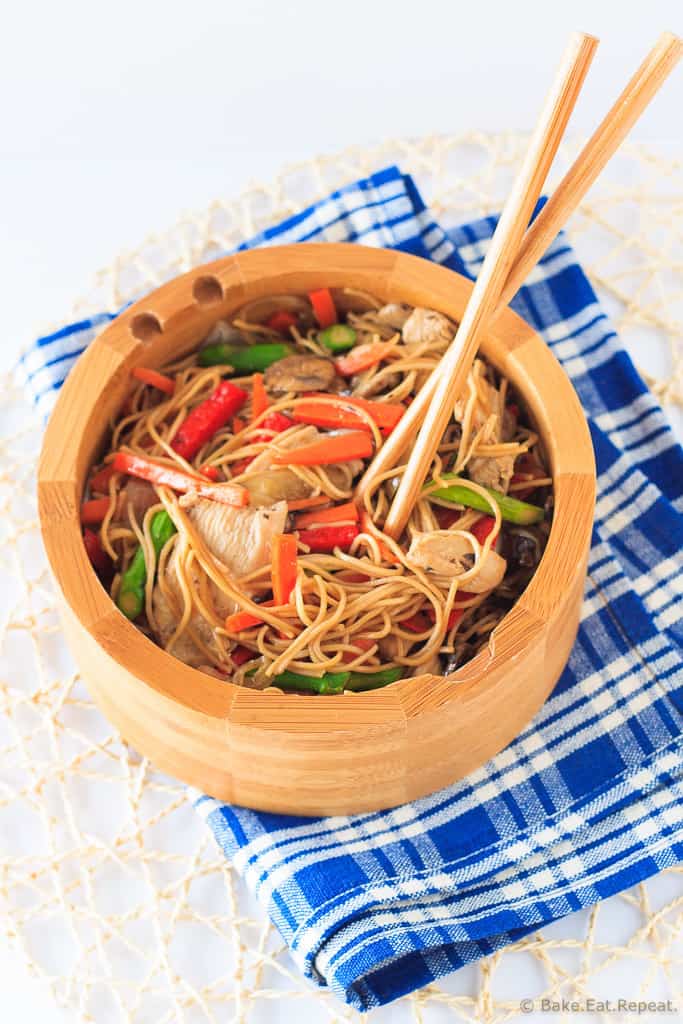 I'm a wee bit late to get on the Stacey bandwagon but boy sure glad I did!!

May I know what can the sherry be substituted with please?

-Love and greetings from sunny Singapore -

Hi Adah - you can substitute with dry white wine or apple cider, or just leave it out if you like. Hope you like the chow mein!

I love chinese take-out, but sometimes you never know what your going to get. And frankly, I have been to more than my fair share of sketchy hole-in-the-wall places in search of something to satisfy my craving. I am totally making this next week.

It's so good Rachel - I actually just bought more egg noodles at the store today so I could make it again. I'm completely addicted! Thanks!

Yumm! Nothing like Chow Mein after a hard day of work! Awesome blog you have here. Are you interested in becoming Chicory App 's official recipe partner?

Thanks! I'm not sure, but you can certainly send me some information on it via my contact form.

This Chicken Chow Mein looks better than anything I've ever got from take-out or delivery. It must be fantastic if you made it 3 times in 1 month! I definitely need to put this on my to do list.

Seriously - that doesn't happen often around here, much to the chagrin of my family! Thanks Rachelle!

I don't make nearly enough Chinese take-out at home. I need to change this asap! Loving this recipe, Stacey! Yum!

You do! So good! Thanks Justine!