I have eaten far, far too many brownies in the last couple of weeks.  Far too many.

I started forcing my neighbours and the people at my husbands office to eat brownies and give me feedback because you can only eat so many brownies before they all start tasting the same.  I got a little sick of chocolate this week.  Pigs must be flying because I honestly did not think that those words would ever come out of my mouth.  Or, you know, be typed. 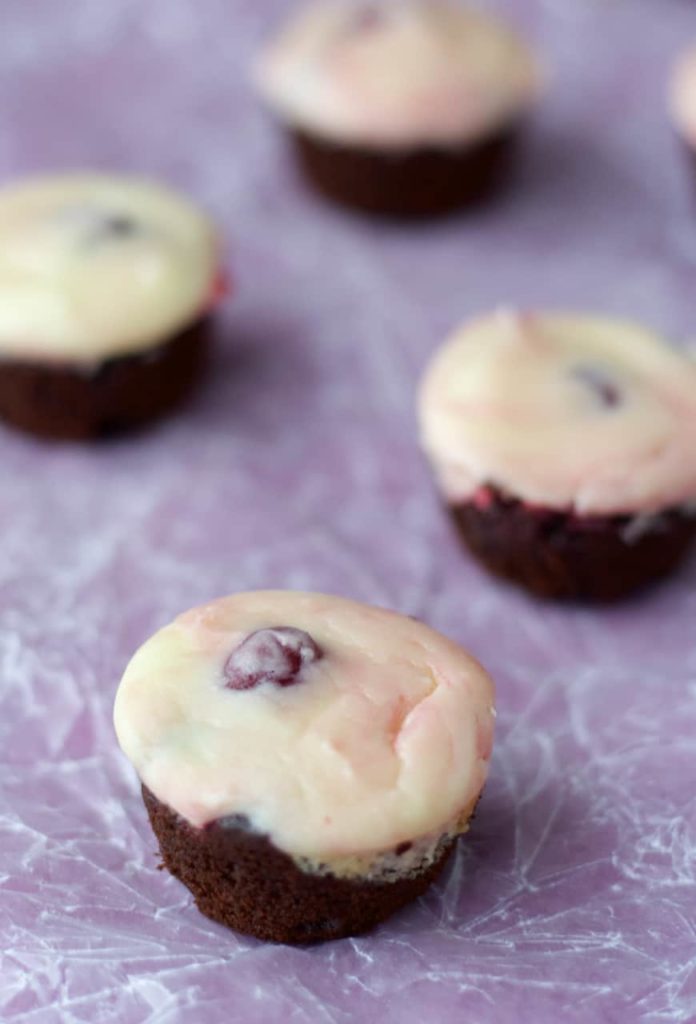 But I was bound and determined to make these brownies work.  With cheesecake.  Cherry cheesecake to be exact.  And they needed to be chocolatey and cheesecakey and amazing.  Not too much to ask, I don’t think.

Except that I also needed to use lentils.  You weren’t expecting that right?  Either were all the people I foisted them on.  But they never knew, so don’t worry, these taste like cherry cheesecake brownies, not like lentils.  You can’t taste the lentils at all, they essentially replace the flour in the brownies.  All you taste is chocolatey cheesecake deliciousness.  Yes. 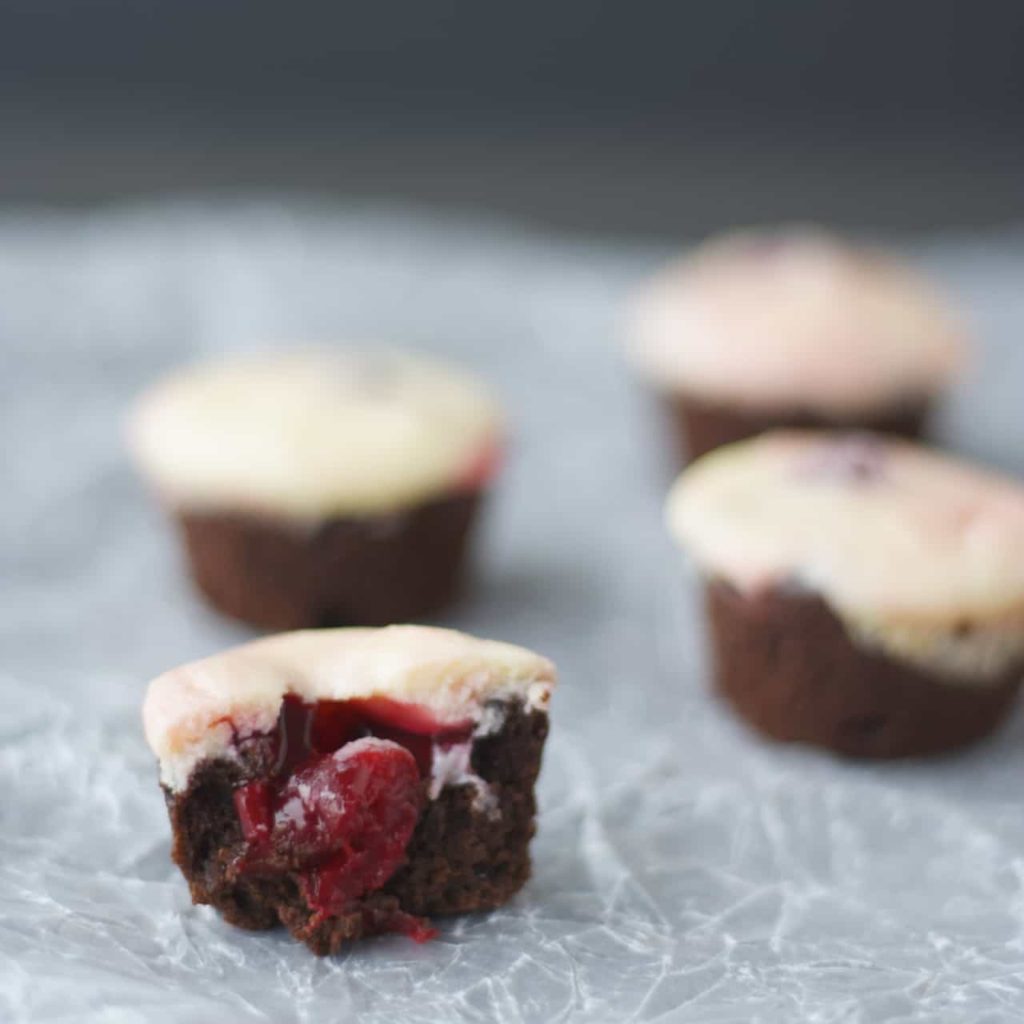 These are, in a word, amazing.  Trust me.

And since there’s lentils in your brownies, you can basically call them a health food.  Right?  Lentils must negate the butter and oil and chocolate and sugar.  I’m sure of it.  They’re a superfood with all sorts of fibre and protein so that totally makes up for the rest!  Okay, I’ll admit that these aren’t healthy, but they ARE definitely healthier than brownies made with flour, so that’s something.  I’ll take it.

Cherry cheesecake brownie bites anyone?  I have lots of them.  And they’re delicious. 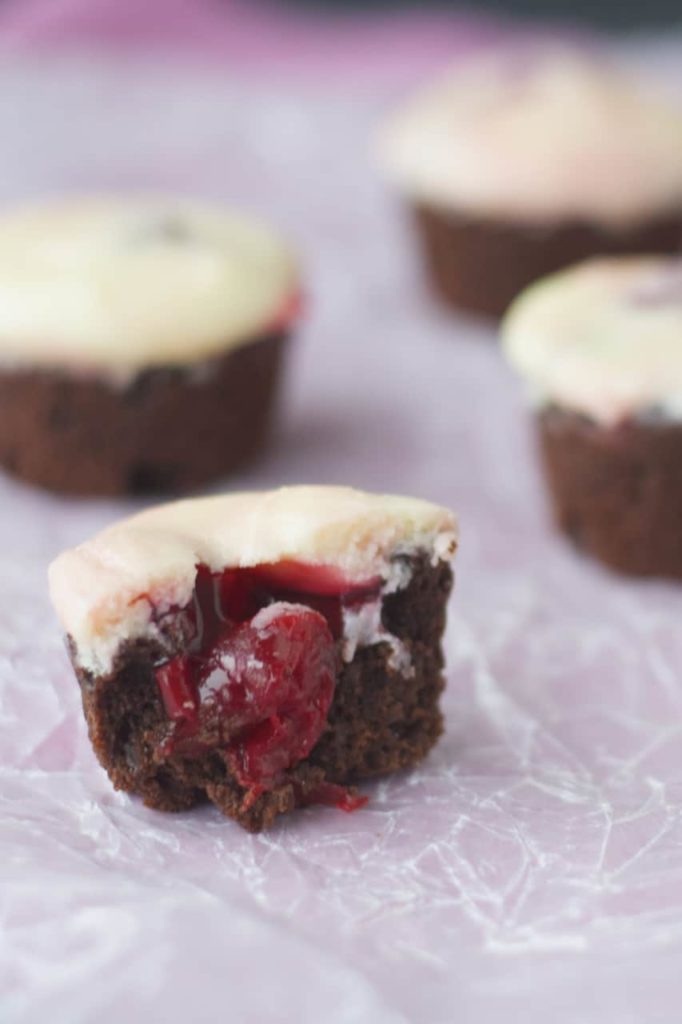 I’ve entered this recipe in the 2015 Lentil Recipe Challenge.  Part of the judging process is based on popularity of the recipes on their Pinterest board.  I would love it if you would go here and repin my submission to help me out in the contest!  Thanks!

For the brownie base:

Amazing! I can't wait to make these. Say, do you think little cupcake liners would work? Just wondering- I have a sweet collection of pretty little liners!

I used mini liners, and they came out perfectly!

Thanks Monica! I would imagine liners would work just fine - I don't have the patience for the little mini liners though - they always move around as I'm trying to fill them! But if you have the patience for it, go for it! :) There isn't much oil in the brownie base though, so they may stick a bit, but it might be fine - I just lightly sprayed my muffin tin and they came out fine. Hope you like them!

I saw these on FB! It amazes me that they are flourless! Love how cute they look! Pinned and shared :)

Thanks so much Mira!

I think this is so cool!!! It never occurred to me to stuff lentils or anything similar into a baked good. I guess I have heard of beans in brownies though, and apparently they taste pretty good. These little nuggets look amazing!! So creative!

Okay I love that there are lentils in these!! That's kinda awesome - they look delicious!

haha oh gosh and I know that exact feeling. You've made something so many times to get it just right but it all starts to taste the same after awhile and you can't tell if it's different or better or not!

Exactly! It was all just the same after a while! Thanks Ashley!

NO. WAY. There are lentils in this?? I never ever would've guessed! They're so pretty and fudgy and that cheesecake and cherry combo looks like the bomb. You nailed these Stacey!